In this article, we will talk about the Thompson Sampling Algorithm for solving the multi-armed bandit problem and implement the algorithm in Python.

Thompson Sampling Algorithm:
Thompson Sampling is one of the oldest heuristics to solve the Multi-Armed Bandit problem. This is a probabilistic algorithm based on Bayesian ideas. It is called sampling because it picks random samples from a probability distribution for each arm. This could be defined as a Beta Bernoulli sampler. Though Thompson sampling can be generalized to sample from any arbitrary distributions. But the Beta Bernoulli version of Thompson sampling is more intuitive and is actually the best option for many problems in practice. In this tutorial, we will use the Beta Benouli sampler.

Algorithm Comparison: Upper Confidence Bound vs. Thompson Sampling:
There is a significant difference between UCB and Thompson sampling. Firstly UCB is a deterministic algorithm whereas Thompson sampling is a probabilistic algorithm. In UCB you must incorporate the value at every round, you cannot proceed to the next round without adjusting the value. In Thompson, you can accommodate delayed feedback. This means you can update the dataset for your multi-armed bandit problem in a batch manner, that will save your additional computing resource or cost of updating the dataset each time. This is the main advantage of Thompson sampling over UCB.

Recently, it has generated significant interest after several studies demonstrated it to have better empirical performance compared to the UCB algorithm.

How this Algorithm Works?

Now let's look at the steps of the algorithm.

Let's implement this algorithm for our own version of a multi-armed bandit problem. Here we will take a dataset of online advertising campaigns where an ad has 10 different versions. Now our task is to find the best ad using the Thompson sampling algorithm.

Let's look at the steps we need in Thompson sampling:

At the first step, the total number of rewards(either 0 or 1) is counted.

To understand the second step, we need to look at the Bayesian inference rules- 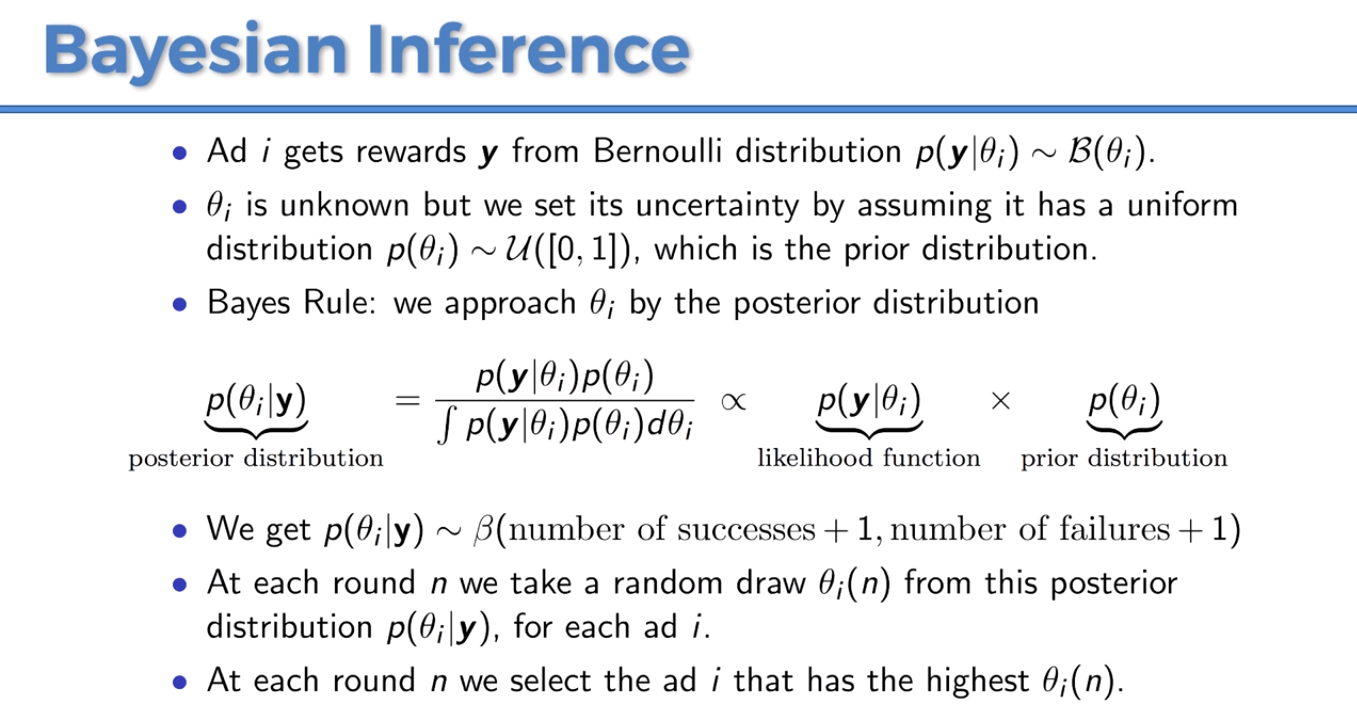 Thompson sampling in Python:
First of all, we need to import essential libraries.

Then we will import our dataset (Ads_CTR_Optimisation.csv)

Now, we have come to the final part of our program. Let's visualize what we got- 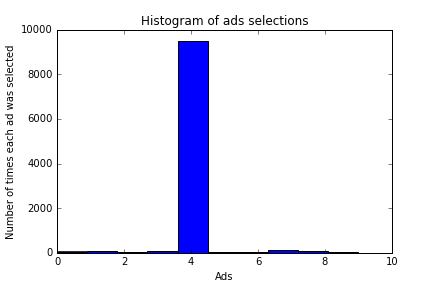 In the above histogram, you can see that ad version five has the highest probability of success. So we will take the fifth version of the ad as output. If you compare this result with our previous Upper Confidence Bound result, you will see a clear difference. Though the UCB algorithm found the same ad version as of Thompson sampling, the Thompson sampling showed better empirical evidence than UCB in practice.