A Simple Explanation of K-means Clustering in Python | Machine Learning 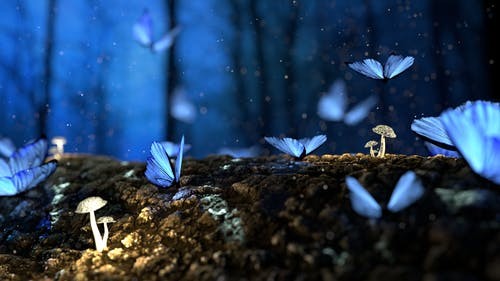 In this tutorial, we are going to understand K-means Clustering and implement the algorithm in Python

Clustering is an unsupervised learning algorithm. A cluster refers to groups of aggregated data points because of certain similarities among them. Clustering algorithms group the data points without referring to known or labeled outcomes.

There are commonly two types of clustering algorithms, namely K-means Clustering and Hierarchical Clustering. In this tutorial, we are going to understand and implement the simplest one of them- the K-means clustering.

What is K-means Clustering?

This algorithm categorizes data points into a predefined number of groups K, where each data point belongs to the group or cluster with the nearest mean. Data points are clustered based on similarities in their features. The algorithm works iteratively to assign each data point to one of the K groups in such a way that the distance(i.e. Euclidian or Manhattan) between the centroid(i.e. the center of the cluster) of that group and the data point be small. The algorithm produces exactly K different clusters of the greatest possible distinction. 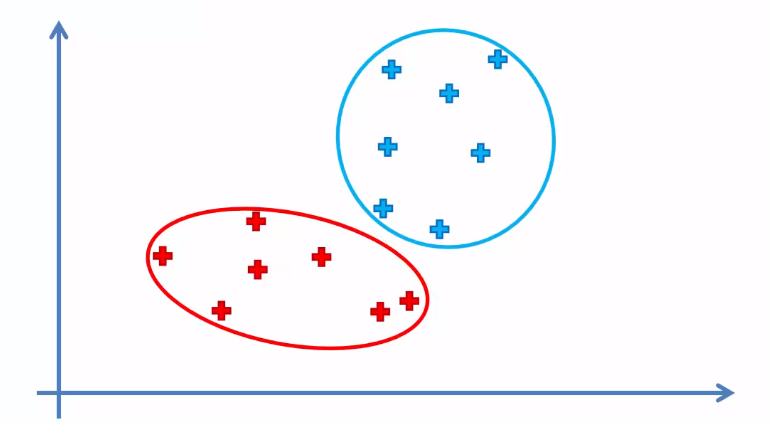 K-means Clustering takes an iterative approach to perform the clustering task. The working steps of this algorithm are as follows-

Step 2: Select at random K points, the centroids(not necessarily from our dataset).

Step 3: Assign each data point to the closest centroid based on euclidian or manhattan distance. That forms K clusters.

Step 4: Compute and place the new centroid of each cluster.

Step 5: Reassign each data point to the new closest centroid. If any reassignment took place, go to step 4.

It stops creating or optimizing clusters if either the centroids have stabilized meaning no new reassignment of data points takes place or the algorithm reaches the defined number of iterations.

Choosing The Optimal Number of Clusters

The value of k is very crucial for optimal outcomes from the algorithm. There are several techniques to choose the optimal value for k including-

Here we will implement the elbow method to find the optimal value for k.

As the K-means algorithm works by taking the distance between the centroid and data points, we can intuitively understand that the higher number of clusters will reduce the distances among the points. For that, we plot the number of clusters k and the Within Cluster Sum of Squares(WCSS). The plot would look like an elbow, as with an increasing number of clusters after a certain point, the WCSS starts to stabilize and tends to go parallel with the horizontal axis. So we will take that point after which the plot tends to become similar. 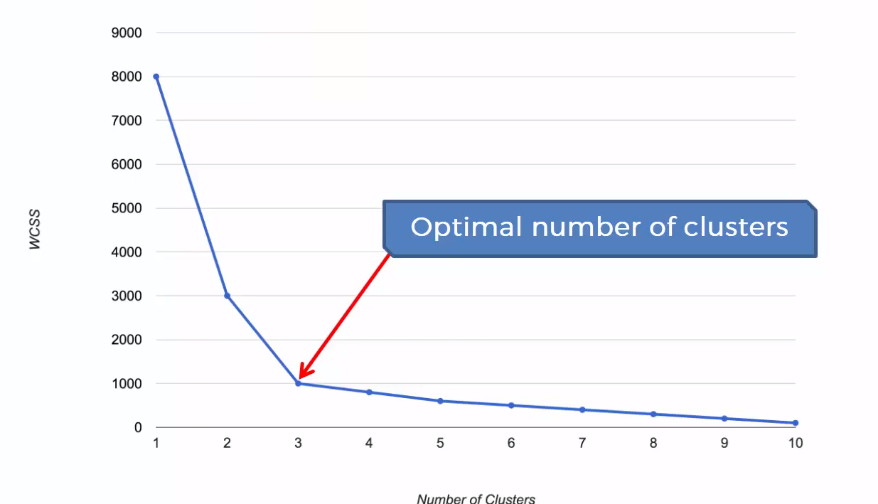 The Within Cluster Sum of Squares(WCSS) is used to calculate the variance in the data points. The goal of the algorithm is to minimize this value.

Now, we will implement the above idea in Python using the sklearn library.

Let's assume we have a dataset(Mall_Customer.csv) where the details of all customers in a mail are recorded. The features are the genre of the customers(Male or Female), their age, annual income and spending score on a scale of 1 to 100. The data are unlabeled that is there is no output column like in a regression or classification dataset. So, the problem falls in the unsupervised class.

Now, our task is to find a number of groups among the customers according to their annual income and spending score. Let's apply K-means clustering and see what happens.

First of all, we will import essential libraries.

We need to find the number of cluseter or k. For this we will plot a elbow method graph to find the optimal value for k.

Note: Here, the parameter init is set to k-means++ to avoid the random initialization trap. 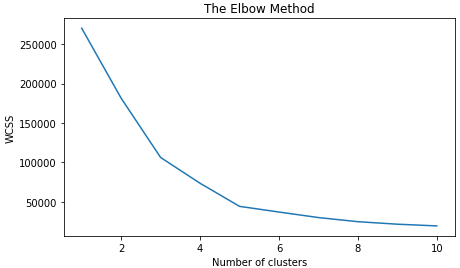 From the above graph, we can see that the optimal value for k is 5(the point where the clustering going parallel with the increasing number of clusters).


Well, we will come to the coolest part of our algorithm. Now we will visualize the outcomes to see what it has done. 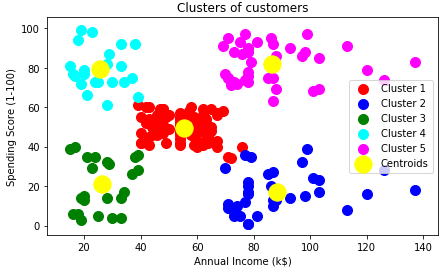 We can see that the data points are grouped in 5 clusters as we defined in the algorithm. This algorithm is one of the simplest clustering algorithms and has various business uses.

Clustering is widely used in many domains from business to biology. Here are some cool applications of K-means clustering-

Choosing the Distance Metric for Clustering

What is the Time Complexity of K-means Clustering?

K-means clustering falls in the class of NP-hard problems. So the time complexity is polynomial.

In most cases, the worst complexity for K-means clustering is O(n^2 * log(n))

Where n is the number of points.

More precisely, the complexity should be expressed as- O(ndk)

d = dimension of the data

Why K-means Clustering is a Non-Deterministic Algorithm?

K-means clustering gets non-deterministic natures due to its random selection of data points as initial centroids. For this randomness, you will get different results on the same instance of data set for different execution.

This nature limits the applicability of K-means clustering in areas such as cancer prediction using gene expression data. The result can be misinterpreted when comparing with other models.

But some measures can be taken such as fixing the choice of initial centroid to decrease the randomness and making the model close to deterministic.

In this tutorial, I have tried to present and explain all the basic concepts of K-means clustering to you. In summary, the key takeaways are-

Hope the tutorial helped you to understand the concepts.

What difficulties you faced or new things discovered when doing K-means clustering?

Please let us know in the comments.