In this article, we are going to learn and implement an Artificial Neural Network(ANN) in Python.

To get a clear idea, let's take a look at a biological neuron. 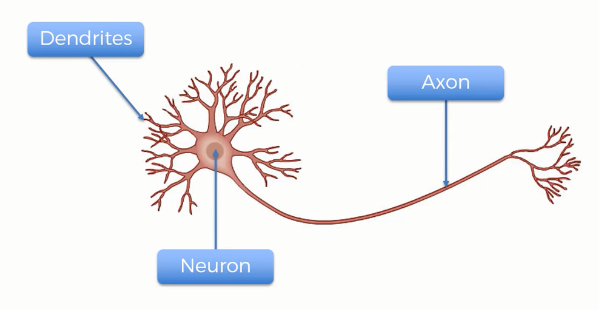 A human neuron has three parts- the main body, the axon, and the dendrites. Though one neuron itself does not have any significance, when millions or probably billions of neurons work together, they can process a task like reading and understanding this article.

Well, you can think of an artificial neuron as a simulation of a human neuron. It tries to mimic the works of a human neuron using mathematics and machine learning algorithms. Here is also, as a biological neuron, a single AN can not do any significant task. But when we connect a number of neurons in layers, they together can do some tasks like classification or regression.

Here you can see a simplified illustration of an artificial neuron. It takes inputs from some neurons i.e. x1, x2, xm, processes them using some mathematical functions called activation functions and produces an output. ANN has much more complex structures. It also includes some hidden layers and other structures. 3.Rectifier Function: It is one of the most popular activation functions. It provides a zero for a negative value and gradually increases to one for a positive value. It is widely used in the input layer nodes. 4. Hyperbolic tangent function: It provides output for both negative and positive input values. How Does the Neural Network Work?

When we connect a number of artificial neurons, that forms a neural network. Then the network can carry out some tasks like classification and regression. To understand the whole idea, let's take an example, assume that we need to find the price of an apartment in a particular area, where the input parameters are the area of the apartment, number of bedrooms, how far it is from the city, and the age of the apartment. Now let's build an ANN model that will predict the price of a particular apartment using this set of input parameters. We are not going into the details, but assume that in the hidden layer we are using an activation function i.e. Rectifier function that calculates the weighted input and pass a value to the output layer where we are using another activation function i.e. Sigmoid function, that upon the input from the hidden layer, calculates the probable value of that apartment. Here we have shown a simplified feedforward network, you may need to use more complex models for other problems. How do Neural Networks Learn?

Though the idea of learning neural networks a bit complex, we can simplify the concept. In a simple sense, we feed in inputs to the input layer nodes(individual neurons), which are connected to some hidden layers nodes. The inputs are processed and fed to the output layer. Then we compare the predicted value with the actual value using a cost function. In ML,  a cost function is used to measure how good or bad a model is performing. Here we take a cost function, C which is the squared average difference between the predicted and actual outcomes.

Then we update the weights in the input layer based on the cost function output. This update is performed by using a gradient descent function. This type of network is called backpropagation network. Because we are providing the input and updating the weights from the output iteratively.

After some iterations (until a satisfactory outcome), we assume that the model has learned successfully.

Gradient Descent Function: Gradient descent is an optimization algorithm for updating the weights to the input layer nodes after the comparison done by the cost function. It uses a first-order differential equation that tries to minimize the cost function. That means it tries to find the lowest error value. In this article, we will use the stochastic gradient descent function.

STEP 1: Randomly initialize the weights to small numbers close to 0 (but not 0).

STEP 2: Input the first observation of your dataset in the input layer, each feature in one input node.

STEP 3: Forward-propagation: from left to right, the neurons are activated in a way that the impact of each neuron's activation is limited by the weights. Propagate the activations until getting the predicted result y.

STEP 4: Compare the predicted result to the actual result. Measure the generated error.

STEP 7: When the whole training set passed through the ANN, that makes an epoch. Redo more epochs.

ANN in Python: In this tutorial, we are going to implement an artificial neural network in Python.

We have a dataset of a bank containing the transaction data of customers. Let's have a look at the dataset-

The dataset contains a number of different features. Now, using these features of the dataset, our task is to classify whether a customer stays or departs from the bank. So this is a classification problem.

For building neural networks we need libraries and modules like Keras, Theona, and TensorFlow. Ensure that you have properly installed them in your anaconda environment. You can find the guideline for installing these here.

First of all, we will import some essential libraries.

Here some of the features are categorical variables. So we will encode them.

Now we split the dataset into training and test sets.

We need to scale our dataset. For this, we will use the StandardScaler library.

Now, we have come to the main part of our program. We will build a neural network using the Keras library.

We will initialize the ANN using the Sequential class from Keras.

We can add more than one hidden layer to our network.

Now, we will add the output layer. Here, we have only one dependent variable. So our output layer only contains one node. We used the sigmoid function as the activation function.

It's time to fit the classifier algorithm into our dataset. we take the number of iteration, nb_epoch to 100 which means the whole network will run a hundred times.

Now, we will predict the outcome of the ANN.

Let's see how good our model is for making the prediction.

From the above confusion matrix, we can see the accuracy of the model is 84%