Time series is the most common data type you encounter every day. They are everywhere- daily weather update, weekly stock price, annual sales of a company, your daily calorie consumption, and so on. As a data scientist, you will encounter time series data so often. So it is kind of a must-have skill for a data scientist to analyze time-series data.

Time series is a collection of data based on sequential time(hour, day, month, year, etc.). Here the data is dependent on time. That means you have to consider the time alongside with other variables. Weather forecasting is a great example of a time series analysis. Here the weather data is collected over a period of time and upon that data, the future weather is predicted.

Whether you are a beginner or aspiring data scientist looking for a comprehensive guideline to work with time-series data, this is the greatest tutorial for you. In this tutorial, you are going to be familiarized with different aspects of time-series data and build a model to forecast the future time series using the ARIMA model in Python. Let's dive deep into it!

What is Time Series Analysis?

Time series is a special type of data for doing analysis. Time series analysis is basically analyzing the data to find some pattern or trend over a certain period of time. After successfully analyzing the data, you have to forecast future trends/patterns. The nature of time series analysis is more identical to regression analysis, but here the data is time-dependent. In regression, it is assumed that the variables must be independent of each other. So, mere regression analysis can not be applied to time series data. You need different tools to do analysis.

Key Contents of the Tutorial

The Components of Time Series

Keeping these components in mind, we have to work with time-series data. In the next section, we will learn about which type of time series can be analyzed or forecasted.

First, we need to load the essential libraries.

We are using the stock price dataset of apple from 1980 to 2020. The dataset contains the high, low, open, and close prices of the stocks of Apple and also the volume of the stock. For simplicity, we only analyze the closing price of the stock data. Let's read the dataset!

Before going to further operations, let's have an eye on the data.

This is how the data looks like. Here, the data format is not appropriate to work(time is a very important parameter in time series analysis, remember!). So, we need to take the time into a suitable format and also we have to make the 'Date' column as the index for further analysis.

Now, we have imported and made the dataset working with further analysis. 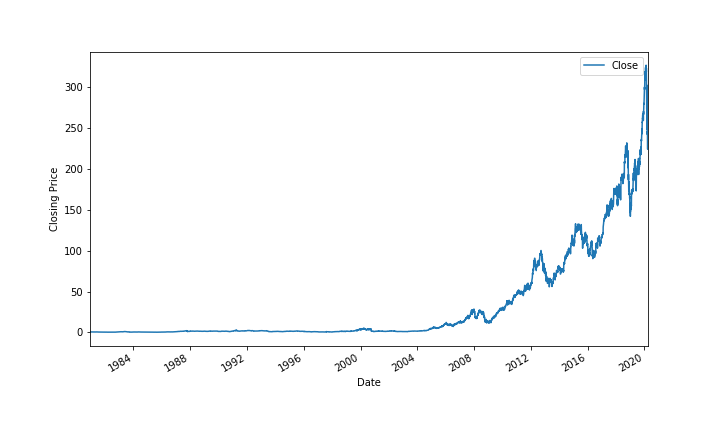 This simple line plot shows us many important characteristics of our data. Here, you can observe that the closing price shows an uptrend with time. This is because of Apple inc. has been growing its worth day by day. So, it is intuitive that the price of their stocks will get higher.

From the graph, we can say that the stock price shows a trend. We can not forecast the time series that shows a trend. This is because it does not possess the quality of being stationary. And to apply any statistical model to time series data, we must ensure that the data is stationary in nature.

What is Stationarity in Time Series?

Now, let's check the rolling statistics for a time window of one year of our time series- 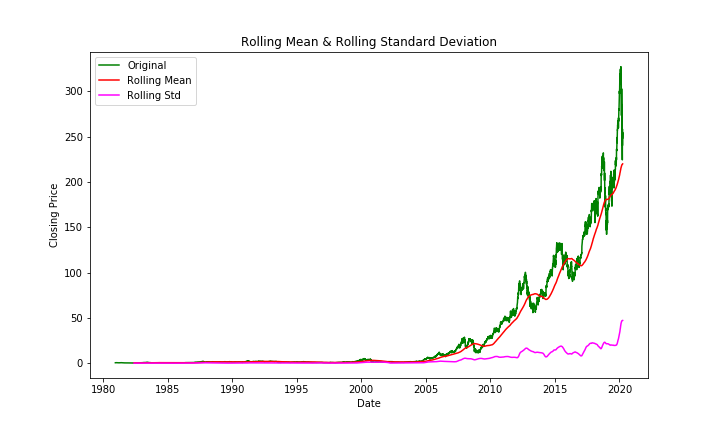 The interpretation of this plot is scary! As the rolling mean and rolling standard deviation are not constant over time, we can conclude that the data is not stationary.

Augmented Dickey-Fuller Test(ADF Test) It is the most common statistical test to determine whether a time series is stationary or not. It works with taking a null hypothesis that tells that the series is not stationary. A minimal value of p(<0.005) is required to reject that null hypothesis. The test also considers the ADF statistics must be less than different critical values. In python, we can apply the ADF test using the Statsmodels library.

Here the p-value is much higher than the threshold(0.005) and the ADF statistic is also significantly higher than the critical values. So, we can not reject the null hypothesis and must conclude that the time series is not stationary.

Our time series is not stationary which means we can not fit any statistical models to it and forecast the future. So, how can we make a time series stationary?

Before proceed to the next section make a function of both tests as we will need them many times to test stationarity.

Log Transformation The log values of the dependent variable(here it is the 'Close' column) will lower down the rolling average to some extent. Let's check that. 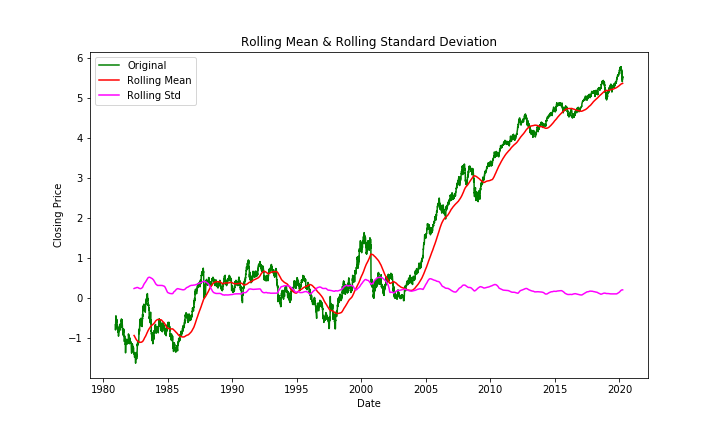 From both the test we can see that the p-value can not satisfy to reject the null hypothesis and the ADF statistics is higher than the critical values. So, log transformation won't help us to make the time series stationary.

Subtracting Rolling Mean to the Log Values To make the series stationary we can subtract the rolling mean from the log values. Let's check what happens- 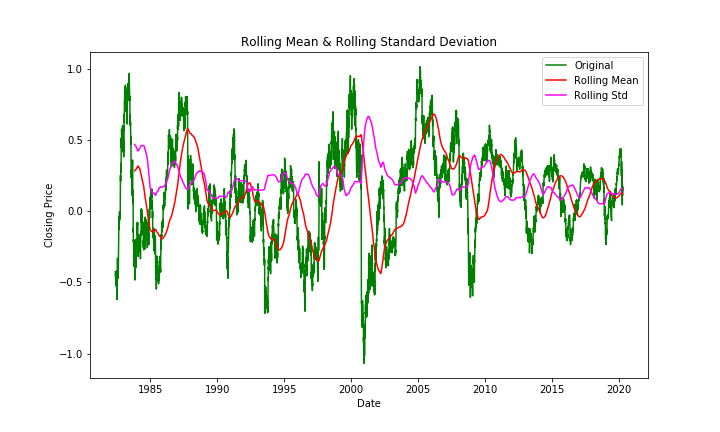 Here the ADF statistic is less than the critical values. But the rolling mean and rolling standard deviation are not constant and still, the p-value is higher than the threshold. So, we can not reject the null hypothesis yet and conclude it as a stationary series. 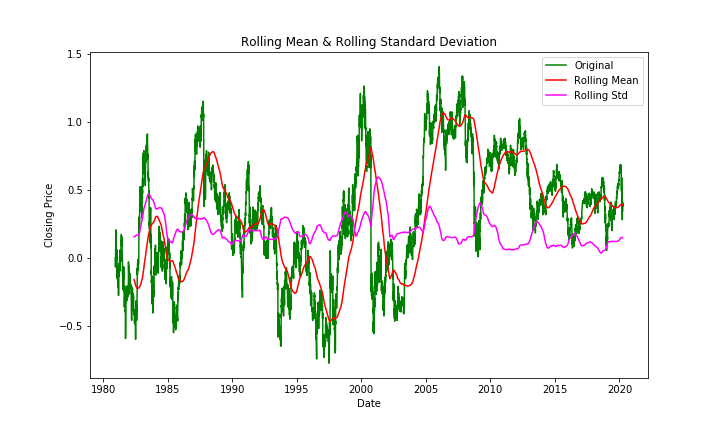 Still the rolling mean and standard deviation have not become constant and the p-value is still higher. So, the series has yet not become a stationary series. 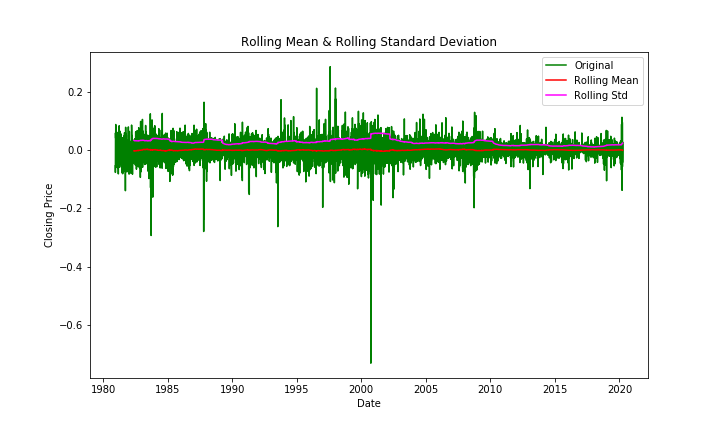 The rolling mean and standard deviation now become quite consistent, the ADF statistic is lower than the critical values and the p-value is lower than the threshold. Excellent! The time series have converged to stationary and now we can apply statistical models to it.

There are many statistical models available in python to perform time series forecasting. In our tutorial, we are using the most popular ARIMA model to forecast the time series. It is the combination of two different models called AR and MA models with adding an integration factor to it. Before using the model, let's take a look at these models.

Auto-Regressive or AR Model It is quite similar to the multiple linear regression model. Here the difference is it depends upon the linear combinations of the past values of a dependent variable to forecast the target variable. For example, if we want the forecast of today's stock price, the AR model will analyze the linear combinations of the stock's past values to forecast that.

Auto-Regressive Integrated Moving Average or ARIMA Model Also known as the Box-Jenkins model is basically the combination of AR and MA models. Here a differencing factor is used to make the time series stationary. A stationary time series that does not show any seasonal patterns or trends can be modeled with an ARIMA model. To work with an ARIMA model, we need to consider three factors-

Determine the Order of the ARIMA Model

When you build the ARIMA model in Python you have to specify the p, q, and the d parameters. These parameters are very important to make the model better forecasting the variable. You can determine those parameters both manually and automatically. Here, are the different ways you can find the parameters-

Auto Correlation Function(ACF) This function gives us the autocorrelation of the present value with its lagged values. It tells us how well the present value is related to its past values in time. ACF function is commonly used to find the ordering terms of the MA model.

Partial Auto Correlation Function(PACF) It is a subset of ACF. Here, the autocorrelation is calculated between the two points in time with taking account of the residual of the lagged correlated values. Hence the correlation is not complete. It is used to find the AR ordering or p terms.

Auto ARIMA Model This model is an implementation of the R language's auto.arima() function. There are many packages and codes available to implement the model in Python.

Now, we will apply the ARIMA model in Python to forecast our time series. First of all, we will decompose the time series to check how close it is related to our original series. 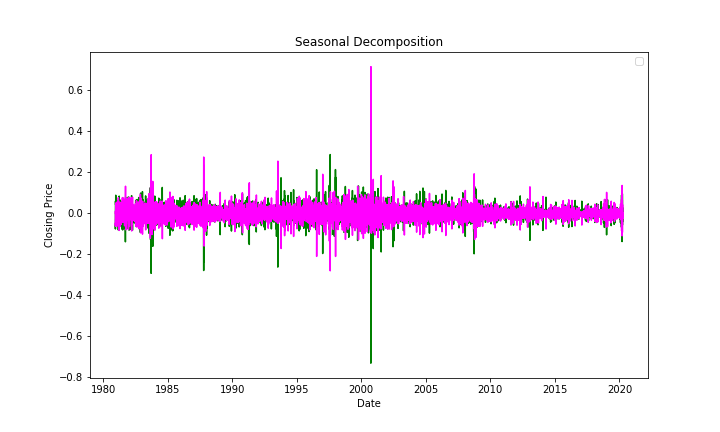 Now we will see how well it fits our model-

If you have come this far, then congratulations to you! Now, you have got a clear idea of time series analysis and forecasting in Python. Time series analysis is a huge part of the data science domain. And you can not learn everything with just this tutorial. For this, you need more and more practice. You should review the whole article again and find a new dataset to work on with these codes. Feel free to change the codes where necessary.

Hope this tutorial helped to learn time series analysis. If you have some cool ideas to make this project more effective, let us know.

You can find the source code of the tutorial in this Github repository.