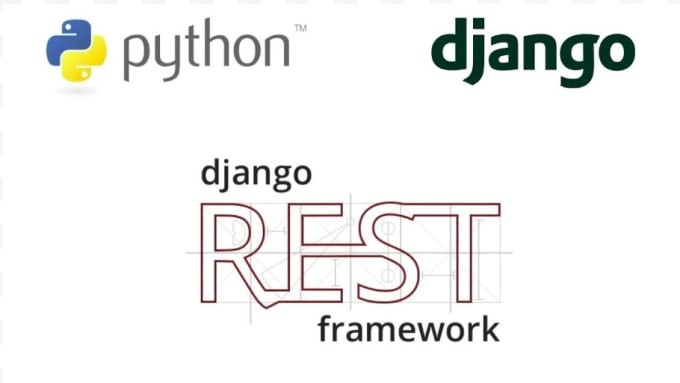 If you have so far worked with machine learning models locally, just applying ML algorithms on datasets and making predictions, you should know how to deploy them on the web. In this tutorial, I will walk you through different steps to build and deploy a machine learning model using Django and REST API, let’s dive deep into it!

Django is a high-level Python framework that lets you build robust and scalable web applications. This is the most popular framework available in python. It follows the MVT or Model-View-Template pattern. It is closely related to other MVC frameworks like Ruby on Rails and Laravel. In the MVC framework, the view and model parts are controlled by the Controller but in Django, the tasks of a controller are handled implicitly by the framework itself.

Django lets you create a number of applications under a single project. The application has all the functionalities to work independently. The app is considered as a package that you can reuse in other projects without making any major changes. This is the greatest advantage of using Django for building web applications.

What is Django REST Framework?

Django REST framework is a wonderful toolkit for developing robust web APIs using Django and Python. It gives an easy way to serialize the data and provide it to other applications. It is like a door between the database and the program which handles querying the database and formatting of the data. Generally, it uses JSON to format the data.

Machine learning models are mostly written in Python and run locally in a Jupyter notebook or similar IDEs. But when you need to productionize your model that means you make it available on the web, you can do this by one of the following-

Using Django REST frameworks, we can build powerful APIs for our machine learning models. Which will let us handle all the data retrieving tasks without any hassle.

Django vs Flask: Why We Should Use Django for Deploying Machine Learning Models?

Flask is more widely used for deploying machine learning models. This is because it is simple and easy. But it has some drawbacks compared to Django.

Firstly, as a general-purpose web framework, Django provides you more features than Flask. With more modules and features, it will be easier to build and deploy web-based machine learning models.

Though both frameworks are based on Python, you can easily learn Flask and switch from Django. For now, let’s stick to Django and deploy your machine learning model.

If you have read the above words or known before, I think you are determined to go with me to learn how to deploy your first ML project on the web.

In the following sections, we are going to build a simple ML model and web API in Django. Let’s do that! Here are the steps you need to deploy a machine learning model-

The model is built upon a simple dataset where needs to predict whether a customer would buy a car based on her age and salary. For that, I will build a simple Support Vector Machine classifier to make predictions upon the dataset.

If you are using the Anaconda platform, go to the anaconda prompt, and write the following-

This will create a virtual environment. Now, activate the environment-

After activating the environment, install all the requirements for our project.

This will install all the dependencies into your virtual environment.

In Django, the first step is to create a project which will contain the applications(Django lets you build different applications under a single project). This is super easy and can be created with a single command.

In the command line, go to the specific directory where you want to create the project. Then write the following command-

With this, you will get a Django project containing all the important files you need to build your applications. The project structure should look like this- 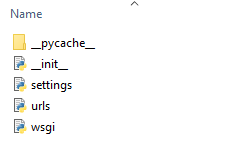 Django lets you build many apps under a single project. An app is a complete web application containing all the necessary files and codes to run independently from other apps. All you need do is to create an app and register it into the project and change some other settings to make it run. You can use apps from other projects too.

This will create a Django app inside the project. Remember rest_framework is itself an app to Django.

Now, go to the settings.py file and register both the rest_framework and your created app in the INSTALLED_APPS section. 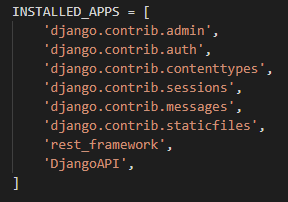 The most important part of our project is to create a database where we can keep and retrieve the data. This database will take care of all the data users provide through the web interface. Upon this data, our machine learning model will make predictions. This data can be used in the future to continuously improve our ML model.

In Django, we can do it simply by making a model. A model is a class in python where we will create the necessary fields to take data from the users. With the specified fields in the model, a similar table will be created in your database. The fields will be the names of the features of our dataset. To build a model identical to our dataset, write the following code in the model.py file of your app-

Here, the Customer is the required model to make our database where gender, age, and salary will represent the features of our dataset.

Now, we need to migrate this model as a table in our dataset. SQLite is the default database in Django. But it supports other databases such as PostgresSQL, MongoDB, MariaDB, Oracle, and so on. You can use any of these databases for your project.

You need to write two different commands to migrate the tables. Type the following commands for that-

This will create a table named Customers into your database.

You need to register this model to the admin.py file to make it work.

Remember, you need to update both the url.py file.

In the projects url.py file, write the following-

Create a Superuser in Django

Now, we need to create a user account as an admin to access and control our databases and other pages. In Django, it is made easier with the following command-

This will require you to give your email address and set a password. Do exactly what it says and create a superuser account in your web application.

After creating a superuser account, you can now check the table and edit it through the admin site.

Create a Form in Django

In our project, we need to collect information from the users, run the ML model into the collected data, and show the output to the user. If we want to collect data from the users, we need to build a form structure in HTML. In Django, the process of creating a form can be done simply with the Form class. This class is much similar to the structure of a Django model. It will simplify all the complicated tasks of managing forms manually by yourself. With this class, you can prepare the HTML template for display the form, render the data, return data to the server, validate and clean up the data and then save or pass the data on for further processing.

Now, we will build a simple form to collect data for our project. Create a  forms.py file into the DjangoAPI app directory and write the following-

This code will create a form that you can use further for different purposes.

We need to create a simple HTML file to show our form to the user. In your templates folder, create a form.html file for showing the form.

This HTML form will be used to collect information.

Then we need another HTML file to show the status after submitting the form. Make a status.html file in your DjangoApi/templates folder.

As we have discussed earlier, we will use a REST API to transfer data between the model and the database. Using the Django-REST framework we can build an API in no time!

In order to allow our model to understand and work with the data, we need to first convert them into native Python datatypes that we can easily render into JSON or XML. In Django, we can use serializers to convert complex data like querysets and model instances to convert into native Python data types and vice versa. It is similar to the model and form class provided by the framework.

Django-REST framework provides a class named Serializers to build your own serializers. Create a file name serializer.py and start editing like the following.

This will be do all the tasks regarding data conversions. We need to set the URL for the API. This will be done later when we will update the app's url.py file

So far we have built most of the necessary things to make our model work. Now, it's time to do the most crucial part of our project, updating the views.

In Django, the view is a python function that takes all the web requests of the site and returns web responses. The responses can be anything, in the project we need to redirect the user to the form, collect the data from it, process it, and show the result to the users. All these things will be done in the view.

Go to the views.py file and update it like the following-

Note: copy the Scaler.sav and Prediction.sav files in your DjangoApi folder and update the path of status function as your project path.

To access all the different parts of our Django app, we need to specify the URLs of the app. First, create a url.py file under the DjangoApi app and update the URLs like the following-

Now, we are all set to collect data from the user, pass them to the model by the REST API, and process them using the model we pickled earlier.

You can get the full source code from this Github repository.

Hope this tutorial helped you to understand the aspects of deploying machine learning models in Django. If you have any ideas to make this tutorial better, let me know in the comments.